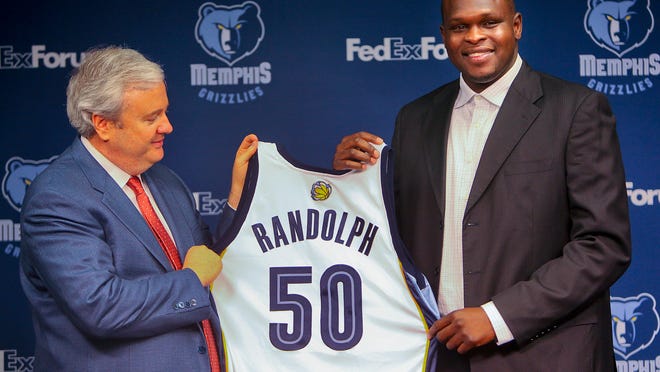 The ceremony will begin after the Grizzlies host the Houston Rockets at 7 p.m. The first 5,000 fans in attendance for the game will receive a commemorative vinyl record in Randolph's honor.

During the game, the Grizzlies will have in-game skits and highlights of Randolph featured on their video screen. Select Terrace Level tickets will also be on sale at 50% off in honor of Randolph's No. 50 being retired.

Musical guests will be present throughout the night including 8Ball & MJG, Al Kapone, the Royal Studios All Star Band and Three 6 Mafia's DJ Paul with Young Buck.

Randolph is the first player in Grizzlies history to have his jersey retired. He spent eight seasons with the Grizzlies and helped lead the team to seven consecutive playoff berths.

Before his jersey ceremony, Randolph will serve as Grand Marshal of this year's Memphis Holiday Parade on Beale St, which begins at 3 p.m. prior to the Grizzlies-Rockets game.

The week's festivities will begin Tuesday with the Grizzlies releasing a documentary on Randolph called "#50ForDaCity" which chronicles his journey to Memphis. It will be available digitally at the Grizzlies' website and YouTube channel.

On Dec. 10, Randolph will attend the Porter-Leath Toy Truck drive at WMC-TV on 1960 Union Ave. from 2-3 p.m. The first 200 fans in attendance who stop by and donate a gift will meet Randolph and get two tickets to the Dec. 11 game.

Want to stay informed on the latest Memphis sports news? A Commercial Appeal subscription gets you unlimited access to the best inside information and updates on local sports, and the ability to tap into sports news from throughout the USA TODAY Network's 109 local sites.

You can reach Evan Barnes on Twitter (@Evan_B) or by email at evan.barnes@commercialappeal.com